Adoption of the consumption dosage strategy with the highest effect:

Consumption dosage strategy of the above product was adopted based on the following:

1. Considering the percentage of the outlet nozzle and MDI pumps and the presence of propellant (HFA) gas and alcohol in the product, the concentration of the mixture of essential oils and herbal compounds in the MDI is about 0.3%. Obviously, the total amount of soluble material available in each puff is about 300 mg, but according to scientific principles, only a limited part of this material reaches the lungs.

2. Regarding essential oils and herbal compounds, 50% poisoning will be observed mainly between 1 to 20 g/kg of human body weight. These compounds are very safe and the consumption dose of PHR160 is much less than the mentioned toxic range and 1000 times less toxic than common essential oils.

3. The preparation time for use or breathing this product is 30 to 45 minutes (this time has been obtained based on theoretical calculations and algorithms of mucus-glycoprotein networks created in the lungs). Accordingly, a maximum interval of 45 minutes to one hour was recommended for administration during waking hours in order to reach the maximum possible dose with this product. 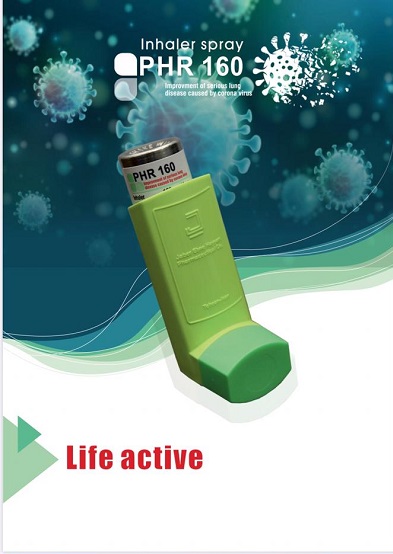 Fatty acids with short, long, single and multiple strings have been extracted from natural products in 6 types of plants by steam distillation method. These plants have all had a history of consumption by humans in single, dual or triple compounds.

Most studies confirm that essential oils are absorbed through the skin, mouth, and lungs, cross the blood-brain barrier, interact with central nervous system receptors, and induce biological functions. Most components of the essential oil are excreted by the kidneys in polar form following the limited metabolism of phase one enzymes by attachment to gluconate or sulfate. For example, after administration, CO2 is excreted by the lungs in the form of menthol, 35% by the kidneys in the form of menthol glucuronide. This procedure also applies to thymol, limonene, eugenol, and other essential oils. The rapid metabolism and short half-life of the active components of essential oils ensure that they accumulate in body tissues only slightly.

Metabolism of phr 160 is hepatic and it is excreted by the kidneys and feces. By inhalation, it is gradually absorbed from the bronchi and part of the ingested drug is absorbed in the gastrointestinal tract. After inhalation, the systemic concentration of the drug is very low. The effectiveness of the drug begins in 5-15 minutes and reaches its maximum in 30 minutes after a deep inhalation. The effect duration of the drug is one hour. According to the studies so far, no serious entry of the drug into the bloodstream has been observed, and according to the strategy defined in the manufacturing phase, the amount of drug has been determined according to its effect on the intended area.

According to credible sources, CFTR is a type of CAMP-regulated chloride channel that regulates other ion channels. CFTR maintains hydration of secretions into the airways and air ducts by excreting chloride and inhibiting sodium uptake. CFTR dysfunction greatly affects organs that secrete mucus, such as the upper and lower airways, and the dehydrated, sticky secretions in the lungs prevent mucosal-ciliary clearance. CFTR is a protein duct that controls the flow of water (H2O) and chlorine ions (-Cl) in the lungs. When the CFTR protein is working properly, ions can easily enter or leave through this duct. However, when this duct is impaired, the ions can no longer leave the cell due to the obstruction of the duct, and this causes thick secretions in the lungs. In this case, mucin glycoprotein networks produce a solid and hard jelly substrate that practically impairs the function of the alveoli. In this regard, in autopsies performed in China on Covid-19 fatalities, physicians reported a type of mucus and sticky discharge that does not resemble fibrosis. A similar concentration of mucous secretions among the patients can suggest that increasing the dilution of mucous secretions improves pulmonary function in these patients. PHR160 can destroy the glycoprotein network to recover the protein duct, increase mucin dilution, and enhance the clearance and sputum production to improve lung function and increase arterial oxygen saturation (spo2).

Considering the percentage of the outlet nozzle and MDI pumps and the presence of propellant (HFA) gas and alcohol in the product, the concentration of active materials in the MDI is about 0.3%. So, the total amount of soluble organic material available in each puff is about 300 nl, but according to scientific principles, only a limited part of this material reaches the lungs. Because the amount of active ingredients in phr160 is in the range of nanograms, it has no toxic effect. Regarding the essential oils and plant compounds, 50% of poisoning occurs mainly between 1 to 20 g/kg of human body weight. The consumption dose of PHR160 is much less than the mentioned toxic range (i.e. 1000 times less than the toxic limit).

To date, no serious side effects have been reported during or after consumption, however, the side effects investigation is still ongoing.

Due to the non-entrance of this drug into the bloodstream and metabolism, usually there is minimal drug interaction and according to available resources, no specific cause has been encountered and it is obvious that studies are ongoing in this regard.

In general, the use of PHR160 spray can be used only for those affected by COVID 19, and the prescription is made after the patient was proved positive for COVID 19.

The course of the disease can be divided into the following phases:

It should be noted that there cannot be an exact boundary between the different phases of the disease and there may be overlap among various phases. Phase change, on the other hand, is not a sequence of steps, and a person may move from phase one to an advanced phase quickly and suddenly.

The diagnosis of the disease at this phase is only made by an in-vivo RT-PCR test. Asymptomatic patients may become symptomatic after a while.

Use instructions of phr160 spray at phase zero:

Children: Twice a day, one puff every six hours during waking hours (use of a spacer is mandatory)

Phase one: Early stages of infection

In terms of disease severity, this is a mild stage. Mild symptoms include fever less than 38 degrees, sore throat with or without dry cough, chills, headache, loss of taste and smell, nausea, vomiting, anorexia, diarrhea, body aches, weakness, and extreme tiredness. These symptoms can vary from person to person, and the patient may have one or more of these symptoms. At this phase, the vital signs of a pulse, blood pressure, and respiration rate are constant and SPO2≥93%. Usually, the patient does not need to be hospitalized.

Use instructions of phr160 spray at phase one :

Adults: Six puffs a day, every two hours (use of a spacer is mandatory)

Children: Three times a day, one puff every six hours during waking hours (use of a spacer is mandatory)

From this phase onwards, hospitalization is recommended for care and treatment. This phase is divided into two modes, moderate and severe.

At this stage, there are the same symptoms as the mild phase, but with more severity. Gastrointestinal and neurological symptoms and severe headaches have been reported. The criteria for entering this phase are:

1. Shortness of breath, chest pain and pressure with or without fever ≥ 38°C

Use instructions of phr160 spray at moderate phase two :

Adults: Eight puffs a day, every two and a half hours during waking hours (use of a spacer is mandatory)

Children: Four puffs a day, every 3 hours during waking hours (use of a spacer is mandatory)

It should be noted that the severe symptoms may appear at any time during the disease and its occurrence does not necessarily require all previous phases. At this phase, there is a range of severe clinical symptoms. The criteria for this phase are:

2. Tachypnea of RR>30 and shortness of breath

4. Increased gradient-A4 as well as increased lung engagement by more than 50% on CT Scan

Use instructions of phr160 spray at sever phase two :

Adults: Ten puffs a day, every one and a half hours during waking hours (use of a spacer is mandatory)

Children: Five puffs a day, every two hours during waking hours (use of a spacer is mandatory)

At this phase, the patient needs special care services. As mentioned, severe symptoms may occur at any time during the disease and do not necessarily require all previous phases. The criterion for entering this phase is the existence of at least one of the following:

2. Signs of shock in the patient

3. The patient needs or is under mechanical ventilation

4. The patient suffers from multi-organ failure

Use instructions of phr160 spray at sever phase three:

Adults: 16 puffs a day, one puff every 45 minutes during waking hours (use of a spacer is mandatory)

Children: Eight puffs a day, every 90 minutes during waking hours (use of a spacer is mandatory)

Note: At this stage, the drug can be used if the patient can breathe without aids.

Note: Manufacturing the suitable drug form for use in the nebulizer device is underway